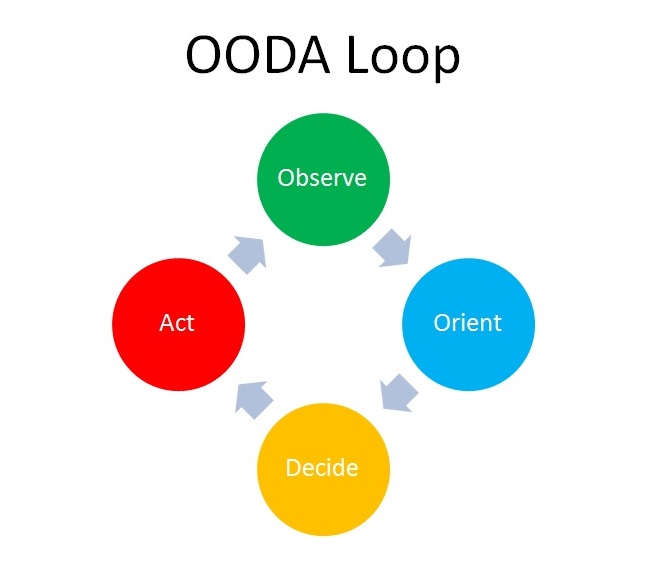 Having spent many years studying and teaching self defense from open hand to firearms, I spend a lot of time talking about awareness.  Most often, we talk about Col. Jeff Cooper’s Color Codes of Awareness.  If you have taken a USCCA class you should be quite familiar with the white, yellow, orange, red and what each “stage” represents.  Most people understand the color codes fairly well and I find it very valuable in talking about awareness.

There is another model which I like to talk about called the OODA loop.  This was developed by USAF Colonel John Boyd.  This takes awareness a step further into action and the way I like to explain it, shows how the tides can be turned on the adversary.  First, let’s look at the model and explain it.  The model is quite simple and in the below I will equate it to the color codes.

While I have seen the model in different formats, this is how I represent it for self-defense scenarios.  (Wikipedia has one of the more interesting and complex diagrams.) 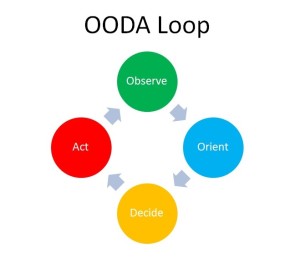 To explain it another way – Imagine yourself walking down the street.  You are “switched on” and you are paying attention to what is going on around you.  You are being observant.  All of a sudden your attention is drawn to something that is out of place – you have now oriented to (focused on) this particular thing.  At this point, you must decide what it is you are going to.  You are going to draw that line in the sand (if they do X – I will do Y).  Then if they cross that line you will act – be it turn into the next shop, run, whatever it is that works for you.

The way I like to explain it is this: Think about the OODA loop like a clock with Observe at 12:00, Orient at 3:00, Decide at 6:00 and Act at 9:00.  The new day starts at midnight – so we must start with Observe.  This is the most critical piece.  If you aren’t being observant you may not see that out of place thing, decide what you will do or act before it is almost too late.  The person(s) who have selected you have observed the crowd, oriented themselves to you, decided what they are going to do and are probably in the process of doing it.  If you aren’t paying attention, how likely do you think it is that you will be able to react before they actually do what they are going to do.  Probably not very.  Remember, action beats reaction.  In the best case, by paying attention, the would-be attacker should notice that, and decide you may not be the best target.  Attackers, tend to not want a struggle nor to be seen, therefore if you see them and they know it – they would likely choose to move on as there are plenty of people immersed in their phones or other distractions.

So how does this relate to a clock?  Good question.  I like to say if the attacker is already at 9:00 (or step 4) and you have not even started your day yet (because you are not paying attention) it will be very difficult to catch up before something happens.  Should you be paying attention, you have seen the attacker, decided what you’re going to do and are doing it – you are at 9:00 as well – much easier to react in a timely fashion.  I also like to point out that you can do a little time travel here.  Eh?  Time travel?  Well – sort of, yes.  Remember in your USCCA class we talk about the Reasonable Person Standard?  OK, good.  Should you be approached by someone who looks intent on doing you harm and they reach for something in their beltline.  What might you think they are doing?  Reaching for a stuffed animal to give you?  I would bet not.  A reasonable person could conclude that they may be reaching for something with which to do you harm.  Now your line in the sand may have been if they reach for something in their beltline I will then push them into the wall and run (or make a pre-emptive strike and get off the line) at which point if they are intent on doing something to you they may have to start over in the OODA sequence.  Meaning they now have to find you again and decide what they are going to do, then do it.  By this time hopefully you are out of harms way.  So, by your being prepared and at 9:00, doing something to them and effectively sending them back to 12:00, you have assisted them in some time travel.  If it is a bit cloudy, thy this on one… have you ever been thinking or talking about something and someone interrupts you or something changes your focus – then you think “now what was I talking about?”  Same thing.

Hopefully, this provides a different look at awareness and gives you another way to look at safety.  For fellow instructors, if you find this useful, hopefully you can incorporate this into your teachings so others may benefit as well.

Chris Love is an NRA and USCCA certified instructor, Range Safety Officer, Law Enforcement and civilian Use of Force and Defensive Tactics Instructor and, OC instructor, and has 25+ years in martial arts.  He has developed and presents a course in Counterterrorism Aboard the Aircraft to commercial airline flight crews.  He owns Level 5 Combat Systems Ltd. based in Colorado and is often called upon by local TV news as a self-protection and CCW expert.